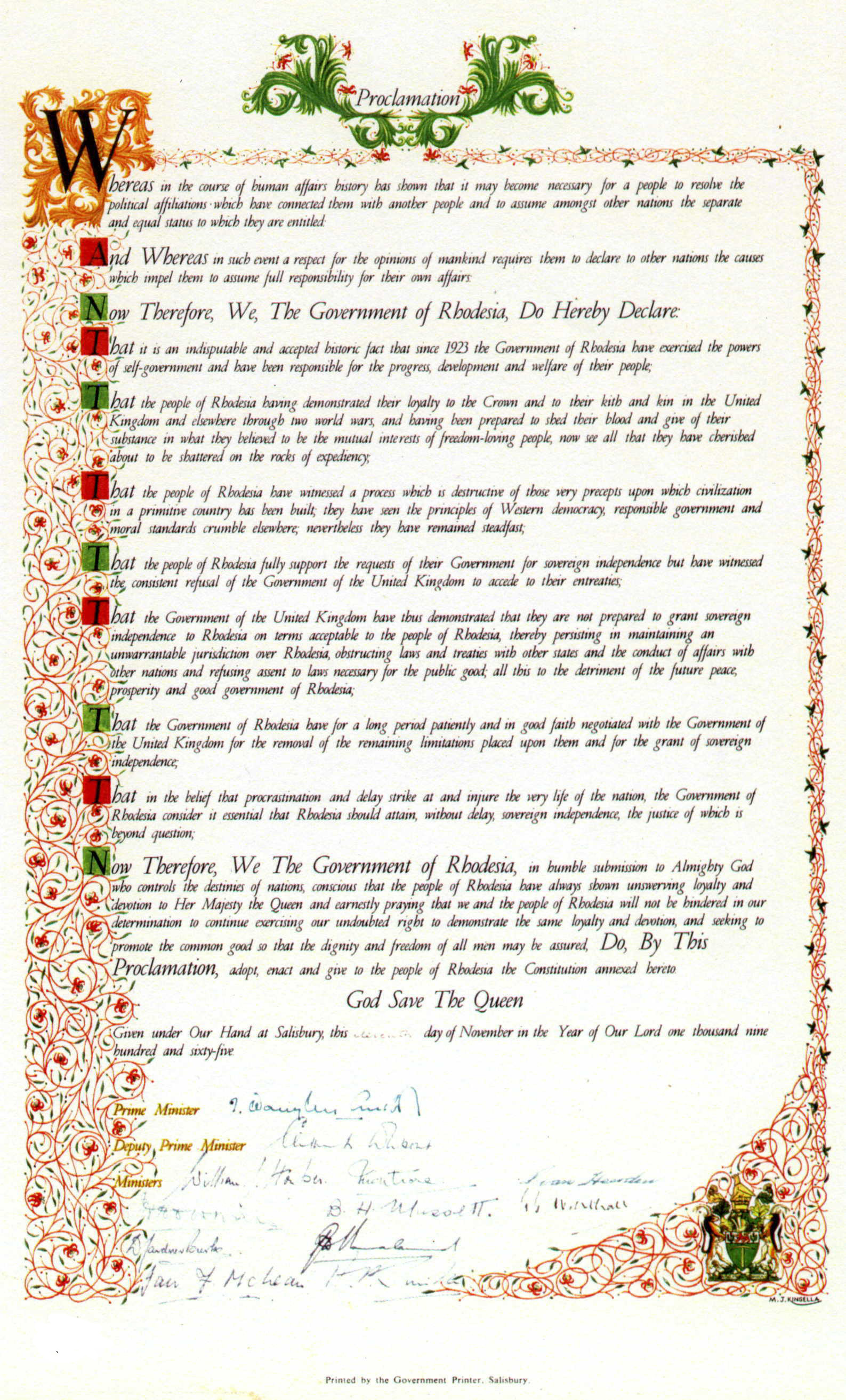 Whereas in the course of human affairs history has shown that it may become necessary for a people to resolve the political affiliations which have connected them with another people and to assume amongst other nations the separate and equal status to which they are entitled.
And whereas in such event a respect for the opinions of mankind requires them to declare to other nations the causes which impel them to assume full responsibility for their own affairs:
Now therefore, we, the Government of Rhodesia, do hereby declare:
That it is an indisputable and accepted historic fact that since 1923 the Government of Rhodesia have exercised the powers of self-government and have been responsible for the progress, development and welfare of their people;
That the people of Rhodesia having demonstrated their loyalty to the Crown and to their kith and kin in the United Kingdom and elsewhere through two world wars, and having been prepared to shed their blood and give of their substance in what they believed to be the mutual interests of freedom-loving people, now see all that they have cherished about to be shattered on the rocks of expediency;
That the people of Rhodesia have witnessed a process which is destructive of those very precepts upon which civilization in a primitive country has been built, they have seen the principles of Western democracy, responsible government and moral standards crumble elsewhere, nevertheless they have remained steadfast;
That the people of Rhodesia fully support the requests of their government for sovereign independence but have witnessed the consistent refusal of the Government of the United Kingdom to accede to their entreaties;
That the government of the UnitedKingdom have thus demonstrated that they are not prepared to grant sovereign independence to Rhodesia on terms acceptable to the people of Rhodesia, thereby persisting in maintaining an unwarrantable jurisdiction over Rhodesia, obstructing laws and treaties with other states and the conduct of affairs with other nations and refusing assent to laws necessary for the public good, all this to the detriment of the future peace, prosperity and good government of Rhodesia;
That the Government of Rhodesia have for a long period patiently and in good faith negotiated with the Government of the United Kingdom for the removal of the remaining limitations placed upon them and for the grant of sovereign independence;
That in the belief that procrastination and delay strike at and injure the very life of the nation, the Government of Rhodesia consider it essential that Rhodesia should attain, without delay, sovereign independence, the justice of which is beyond question;
Now therefore, we the Government of Rhodesia, in humble submission to Almighty God who controls the destinies of nations, conscious that the people of Rhodesia have always shown unswerving loyalty and devotion to Her Majesty the Queen and earnestly praying that we and the people of Rhodesia will not be hindered in our determination to continue exercising our undoubted right to demonstrate the same loyalty and devotion, and seeking to promote the common good so that the dignity and freedom of all men may be assured, do, by this proclamation, adopt enact and give to the people of Rhodesia the constitution annexed hereto;
God Save The Queen
Given under Our Hand at Salisbury this eleventh day of November in the Year of Our Lord one thousand nine hundred and sixty five.
Prime Minister: Ian Smith,
Deputy Prime Minister: Clifford Dupont,
Ministers: William Harper, Montrose, Phillip van Heerden, Jack Howman, Jack Mussett, John Wrathall, Desmond Lardner-Burke, George Rudland, Ian McLean and Arthur Philip Smith.
Printing Instructions: Click on the picture above for a large printable copy. Use a 40% custom print, make sure the print page is for portrait mode and adjust the margins in print preview for a full page print