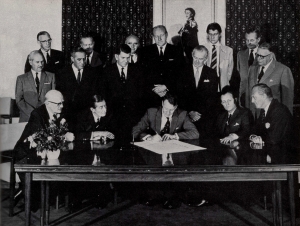 At 11:00 local time on 11 November 1965, during the traditional two minutes’ silence to remember the fallen of the two World Wars, Smith declared Rhodesia independent and signed the proclamation document, with Dupont and the other 10 ministers of the Cabinet
following.

The timing was intended to emphasise the sacrifices Rhodesia had made for Britain in wartime. Queen Elizabeth II’s official portrait hung prominently behind Ian Smith and his ministers as they signed, and the Cabinet still pledged allegiance to her; the declaration even ended “God Save The Queen”.

Printing Instructions: Click on the picture above for a large printable copy. Use a 40% custom print, make sure the print page is for landscape mode and adjust the margins in print preview for a full page print